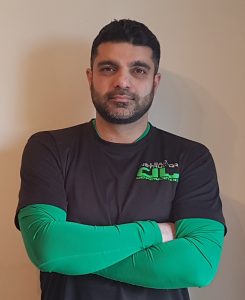 Martial Arts has always been Tahir’s Passion. At the age of 11, he started his martial arts journey like most people did back then with Karate and quickly became to be known in his school as the ‘Karate Kid’. However, he eventually came to the realisation that the real purpose of learning a martial art was not for a belt or some ego trip but in fact to learn how to effectively defend oneself and one’s loved ones. So without any hesitation and just before achieving his black belt, he left Karate in search for something more street effective.

Over the next 11 years, he trained in Muay Thai but again he felt that he needed something more.

So looking into and trying various other styles, his search eventually led him to ‘Defence Lab’ and being so impressed by its teachings, he knew that he had finally found what he was after for all these years. So much was his belief in this new and ever evolving fighting method that he even decided to leave his consultancy business to become a full-time Lead Instructor for ‘Defence Lab’.

His rise within Defence Lab in such a short space of time has been truly extraordinary.

Tahir has many years of experience teaching adults and children in weekly classes, as well as on a 1-2-1 basis, which include Police and Military personnel and those looking to travel to ‘danger zones’ in various parts of the World. He has also built up a large portfolio of Businesses, Organisations, Schools and Colleges, providing them with regular ‘bespoke’ training workshops and seminars.

Although he has refused to be held back by out-dated techniques and has always been quick to adopt the best practices of the time, yet he still holds onto the traditional values of honesty, loyalty, integrity, discipline and strength of character, all of which he aims to pass onto each one of his students. By nature he is very friendly and out-going, who makes his students feel extremely welcome and ‘part of the DL Family’. The training should always be fun and enjoyable whilst at the same time not losing the seriousness of what is being taught.

Tahir genuinely believes that the progression of each student is a reflection of him as an Instructor and so he has a genuine desire to help each student achieve their personal goals. However, this is not to say that the student will not have to do their part. Persistence, effort and the desire to improve must come from within the student……bring these to the class, and you will not only achieve your personal goals, but you will certainly go beyond.

Welcome to the DL Family! 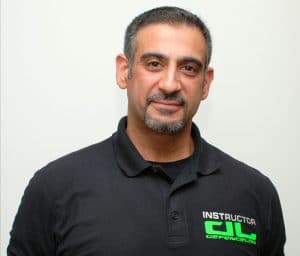 More than any other sport or activity it was always martial arts that attracted Farhaj. His martial arts journey began at an early age of 7, first with Judo, then Boxing and various other traditional and modern styles with the aim of trying to include and cover as many aspects and angles of self-defence.
Still searching for a system that answered all of his questions, he was eventually introduced to Defence Lab and it was an instant realisation to have finally found his answer. All aspects of self-defence in real life scenarios were covered including multiple attacker scenarios. He was so impressed that he switched from the dental industry into becoming a fulltime instructor for Defence Lab.
Farhaj has a sound ability to get on with people of all ages and backgrounds, thereby helping individuals to meet their needs according to their situation. 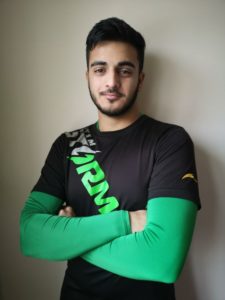 Proudly Tehseen was the first youngest ever Instructor in the history of Defence Lab, worldwide, at the age of only 15 years. A special exception was made by Defence Lab Founder, Andy Norman, due to Tehseen being able to demonstrate excellent physical skills as well as teaching skills.

He then continued to quickly progress becoming also the youngest ever member of Team Storm at only 17.

Tehseen started his martial arts journey with his father from a very early age with Thai-boxing and a little grappling. However, he moved into Defence Lab as soon as Tahir became a DL Instructor.

Tehseen has picked up his father’s style of teaching, having shadowed Tahir from the very beginning. He is incredibly out-going and friendly with both kids and adults thoroughly enjoying his company. Despite his young age, he is highly respected by all students and is able to successfully run classes for all age groups.

Tehseen is definitely a ‘Super’ Defence Lab Instructor in the making! 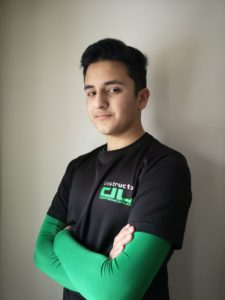 Following in the footsteps of his older brother, Eshan too very proudly became one of the youngest ever Instructors in the history of Defence Lab, worldwide, at the age of only 15 years. Again, a special exception was made due to Eshan being able to demonstrate excellent physical skills as well as teaching skills.

Eshan also started his martial arts journey with his father from a very early age with Thai-boxing and a little grappling. However, he too moved into Defence Lab as soon as Tahir became a DL Instructor.

Having also shadowed Tahir from the very beginning, Eshan has been able to quickly develop both his physical and teachings skills. He gets on extremely well with both the kids and the adults whilst still being able to command the respect as an instructor.

Eshan too is one of the youngsters to especially watch out for within Defence Lab! 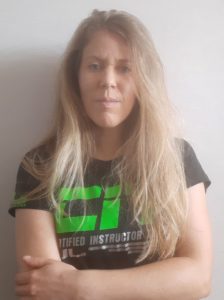 Very proud to have our first lady instructor as part of our team and we hope that this will encourage and inspire even more women.

She became known as ‘Power Laura’ because of her speed and power strikes when serving a ball.

However, she fell in love with Self Defence when she first joined as a student under Tahir. She could immediately see how this empowered her by helping to give her life skills, confidence and determination.

Her background is working with Children and Young People in London. There she observed a real need for people to be able to defend themselves in various situations including multiple attackers as violence has been on the rise.

She therefore decided to join the team and start her training to become a DL Instructor under Tahir with the desire to help as many people as she can to achieve the same empowerment.

Whilst working she also obtained a Foundational Degree in Personal Performance Coaching.

She used coaching techniques to identify her own training goals and noticed how much it encourages and inspires progress.

Laura is passionate about creating an environment where people of all ages can learn new skills in order to become more confident and stronger individuals. 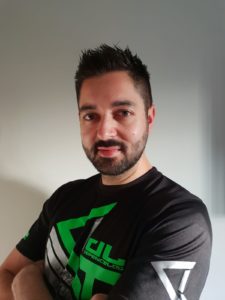 Like many, Tony grew up in an era where Karate was all the rage. Everyone wanted to be the “Karate Kid!” Starting at the age of 7, Tony reached top rank by the age of 14.

His passion and enthusiasm for Karate as a reality based self-defence system took a severe blow during an unfortunate street altercation a few years later when Tony found himself outnumbered 4 to 1.

This experience would leave a lasting impression on him and so, a new quest began for Tony in trying to find answers to questions, Karate had up until that point, been unable to give.

Having experimented with various other martial arts systems such as Wing Chun & Krav Maga, his light bulb moment came when he entered Tahir Ahmad’s Defence Lab in Worcester Park, Surrey for the first time. Andy Normans thought provoking and ever evolving DNA system was able to provide some of those answers in moments.

Having trained as a student with Tahir for a couple of years, he decided to join the team and start his journey as a DL Instructor on a part-time basis.

Tony’s passion now lies in trying to teach and help others find their own answers and reach their own personal goals, whether they be physical, psychological or both.

A real family man with solid core values, his confident yet affable approach creates a real fun and energetic experience, without losing any of the importance of why we are all there.

Tony offers private lessons for individuals and groups as well as regular classes. 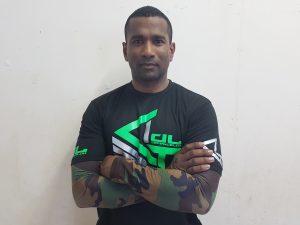 Chris has a fantastic and very rich background with Self Defence and Martial Arts, and for someone of his calibre to join the team and train to become a DL Instructor as well, speaks volumes on the credibility of Defence Lab and how worthwhile and applicable it truly is to learn this system. 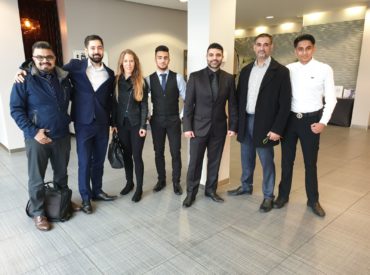 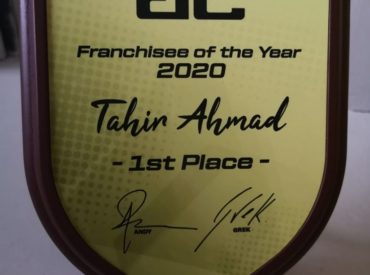 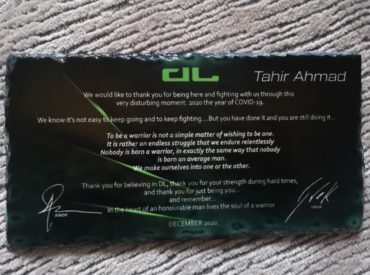 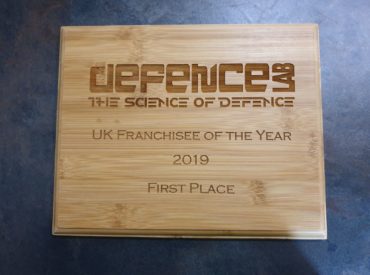 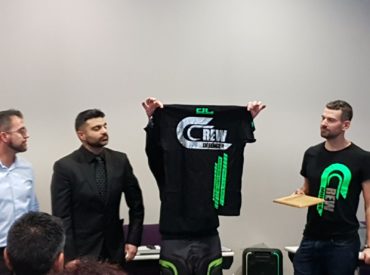 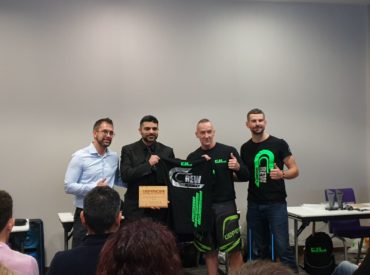 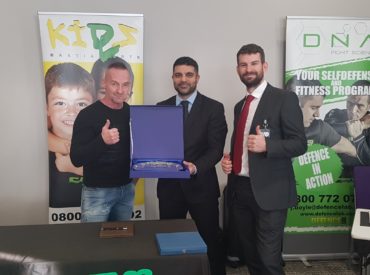 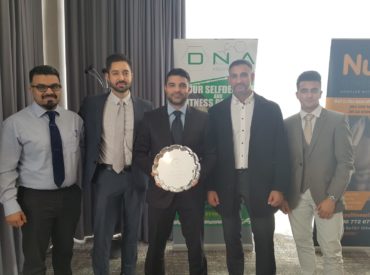 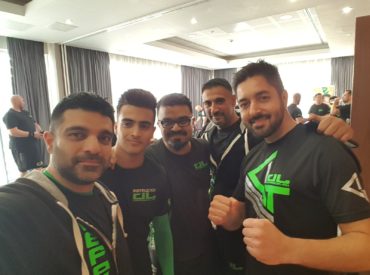 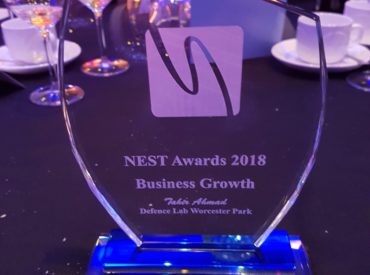 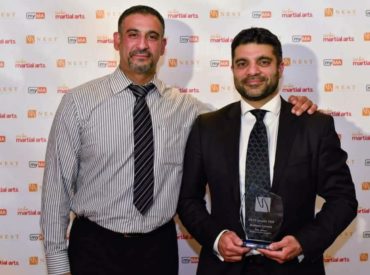 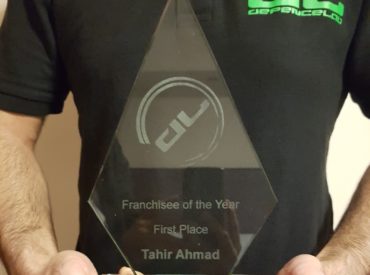 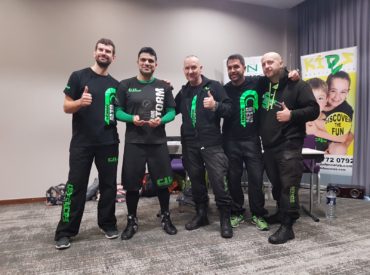 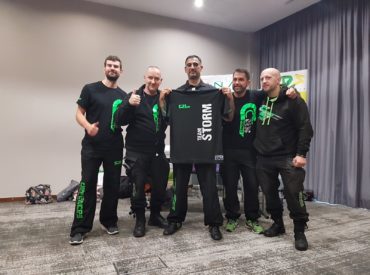 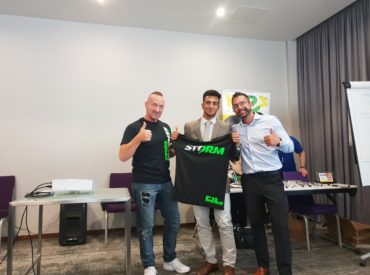 Photos from the Defence Lab UK National Conference, November 2017, November 2018 and November 2019 with DL Founders Andy and Grek, as well as from NEST Awards 2018.