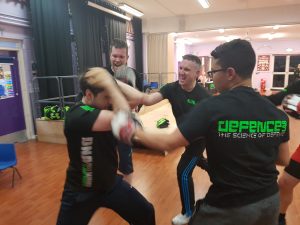 My name is Tahir Ahmad and I am the Lead Instructor for Defence Lab Training. Two nights ago I was sitting in the living room waiting for my 16 year old son to return home. It was about 8:30pm. All of a sudden I hear banging on the front door and find my son breathing heavy and a little disturbed. He tells me that he just got attacked by 3 youths of similar age. Here’s what happened:

He was walking not far from home and 3 boys aged between 16 and 17 years old were approaching from across the road. It was completely an unprovoked attack with the boys surrounding my son who was then quick enough to get his back against a tree. The boy in front began to hurl verbal abuse and threats and my son caught him give the nod to the other boy standing on the side who then swung for my son.

Luckily my son’s training kicked in and he blocked, ducked under and quickly took his back using him as a shield against the other two boys, then pushed the boy slightly forward to allow for a kick straight up into the groin from behind. The boy immediately fell to the ground at which point the 2nd boy came in with a punch and this time my son blocked and threw a hammer strike into his face causing him to drop also.

My son then turned to the 3rd boy who at this point became hesitant to attack after seeing two of his friends getting instantly floored. My son put his hands up to him and said “Don’t” but then one of his friends said “Get him” which prompted him to attack too. Again my son blocked, grabbed a hold of him and swung him around face first into the tree behind.

At this point all 3 boys were on the floor and so my son used this opportunity to make a run for it.

This incident could have gone very wrong becoming any parent’s nightmare but thank God for the fact that my son has been training with Defence Lab for the last 3 years and that his training once again helped him to survive an attack. Last year, he was attacked by a man in his 20’s who quickly found himself floored within 3 seconds. This time my son successfully dealt with a multiple attacker scenario without sustaining any injuries (just as we practise week in and week out in our classes). It just goes to prove yet again that Defence Lab truly is an effective, reality based, street defence system that really does work.

But this incident is yet again another reminder of so many reminders lately, that the world and our streets today are becoming more and more dangerous. Yet it is astonishing to see just how many people are still so oblivious to this fact.

Please people; be more vigilant and careful when you are out and about. Please stop walking around with your headphones on and with your head down looking at your phone. Learn to be aware of your surroundings so to give you that little extra chance to get away or avoid a situation, should it arise. Don’t ever think that it will never happen to you because that’s what ALL victims think before they become victims.

And yes, sometimes just being aware of your surroundings may not be enough. So do yourself and your loved ones a favour and get some proper self defence training too. Understand one thing and that is that no one is ever going to help you….. so you need to only rely on that one person who will always be there for you…… and that is ‘yourself’.

My son definitely did not expect to get attacked that night and as a parent, I am so grateful, proud and re-assured that I am helping my children by empowering them and giving them the necessary skills and confidence they need to never become victims, and giving them the best possible chance to come back home safely. It really is like taking out an insurance policy and guess what? ….. it certainly paid out that night.

Those 3 boys (just like the man last year) must have got a surprise of their life because what happened to them is something usually only out of a movie scene…… it should simply not have happened, but it did and I’m not surprised because that’s what the training is all about.

The world is no longer like what is used to be back in the 80’s and 90’s and these incidents should serve as a real wake up call. True action first requires true realisation and sadly, there are still too many people with their heads stuck in the sand.

Open your eyes, be smart, take action and be safe people.

To learn more about self defence classes near you, click here.