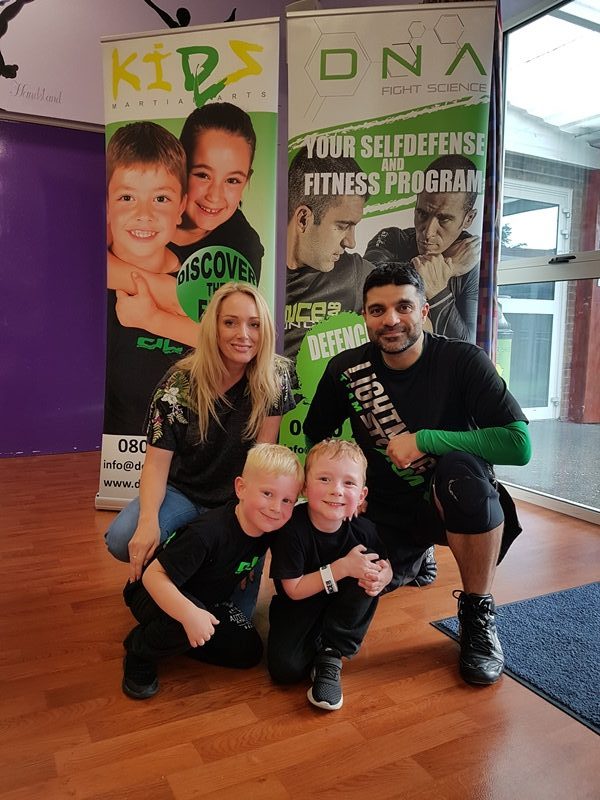 This picture shows myself and my son Ozzy with one of his Defence Lab (DL) friends.

I wanted Ozzy to find a self-defence class as I believe it is important for all children to know how to look after themselves from a young age. I considered many before I found DL and as soon as we had a free trial, I knew I’d found  the one I wanted.

DL mixes method and gentle introduction for young children which appeals greatly to their fun-loving natures. DL has just the right balance between fun and valuable learning of a self-defence technique. Since Ozzy joined in January this year, I have been delighted with the teaching and the progress Ozzy has made.

Tahir introduces self-defence moves and strategies in a way that is appropriate for young children, such as ‘naughty goblin’ games where the goblins have to tap a child who immediately has to assume a kneeling self-defence posture, until another child ‘frees’ them. The children are set into teams and partners regularly and no one is ever left out, Tahir is careful to make each child feel included and encouraged.

Lessons begin with jokes from the young students (often made up and nonsensical, which makes them all the funnier) to encourage their confidence in speaking in front of a group and makes them feel part of the team. The lessons are delivered with such care and humour;  the children are constantly smiling and laughing. Ozzy’s favourite are the team races – each child takes a turn in running up to a teachers, demonstrating the moves they have just been taught, and army crawling back to their team.

Tahir is a family man and this really shows in his kind and calm approach; his own children also support each lesson with their caring mentoring of the young students. Once Ozzy banged his head being tripped over by another child  and Tahir singled him out at the end of the class for being brave; he had seen that Ozzy had hurt himself and commended him for not sitting out and for carrying on – he really has a way of being super encouraging and pushing the children to achieve their best!

Tahir also talks to the children about issues such as how to respond to bullies, or about not using their self-defence moves at schools; his talks carry powerful messages that the children understand and take on board.

The membership has been very flexible in terms of if I need to go on a different night to our usual, which makes it easy to keep the weekly class in the diary. Ozzy has made many friends in two evening groups. DL has improved his listening, concentration in the class and discipline over the past 7 months and I am looking forward to him being graded and receiving his first step up the DL ladder. I absolutely love watching the classes and I am excited to see how Ozzy progresses as part of the DL family.  Thank you DL J