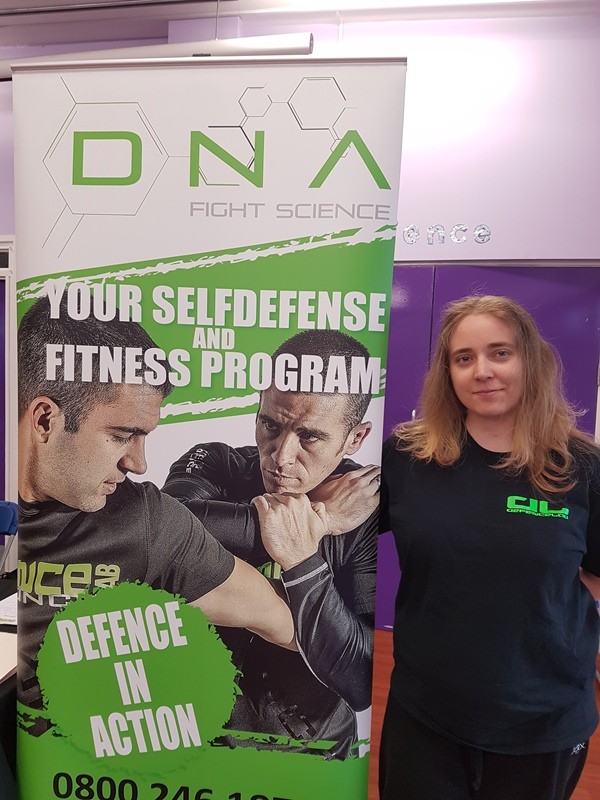 The best part of knowing how to fight, is that you don’t need to.

As an example, I was walking to the parking building to get my car after working an evening shift in Croydon. It was around half past 1 in the morning, and it’s about a 15 minute walk through backstreets with nooks and crannies and the odd nightclub. A man was walking in the opposite direction, on the other side of the street, then I noticed he changed direction and was crossing the road. It took a few seconds to realise that he was coming towards me!

He came up and asked if I wanted to share a taxi, which I politely declined, saying I’d be fine walking. The next question was whether I had any money to spare, to which I replied that I don’t carry cash for safety-reasons. He got progressively more and more insistent, and I was getting uncomfortable, so decided to start looking for a way out.

Looking around, I figured that turning my back would probably be a bad idea, being completely alone. So I took a step back, looked him up and down and decided that yeah, I could take him down if I absolutely had to.

The very moment I had that thought, I felt a shift, was no longer nervous, but had a peaceful confidence that I was safe. The man immediately stepped back and stopped insisting. It was like he had heard my thought, even though I hadn’t said anything, or even taken my hands out of my pockets. He suddenly appeared to have better things to do than harass me for money, and was off in a hurry in the direction he had originally been going.

As he almost ran towards the high street, I felt a bit worried about him being on the street in Croydon, without transport home in the middle of the night, so I shouted after him:

“Look after yourself, yeah? It’s a rough area!” He gave a nervous glance over his shoulder but no further response, and disappeared as quickly as he had appeared.

I’m still trying to pinpoint exactly what it was that scared him to that extent, it’s quite puzzling. Being a woman standing at 5’2 I’m not exactly terrifying.

But there’s a story behind this anecdote: I found Defence Lab online after spending a few months without being able to leave the house, following an event involving medical care and the police, worsening a pre-existing lifelong struggle with anxiety. I had stopped eating, couldn’t work, was in emergency outpatient counselling. After recovering to the point of being able to think rationally, I still struggled with frequent panic attacks and found it difficult to leave the house for the most basic tasks. This is not exactly an ideal situation, something had to be done, so I looked into self-defence while on the waiting list for further counselling.

I had an initial phone call with Tahir (Lead Instructor at Defence Lab Training) about joining the self defence class in Croydon, which gave me quite a bit of hope in the chaos that was going on in my head at the time. He was very understanding, I felt like he actually cared rather than just being polite. I cried a lot during that call, was desperate to get out of the cloud of fear surrounding me wherever I went. I don’t remember much else, that month and the year before it is a blur.

Tahir invited me to have a free trial lesson at one of their weekly classes, and since he was so friendly I managed to muster the courage to come have a look. Can still remember how proud I was for managing to go outside. The first few lessons I didn’t really speak to anyone else out of fear.

All in all, the training has become a major factor in my ongoing recovery, mainly as the physical self-care part of therapy, or at least so I thought. The increase in self-confidence creeps up on you however, and I didn’t realise until a friend commented on it, but more than anything, people in general started treating me differently. My counsellor said “self-acceptance leads to others accepting you as well”.

Thanks to the amazing people working for the NHS, I’m changing from a shivering anxious puddle, to a more functional human being. But it’s the self-defence classes at Defence Lab that’s taking me beyond that, and gives a chance to put into practice the theories that I learn in counselling. Sure, there’s ups and downs, good days and bad days. I do what I can, some days the enemy (anxiety) is stronger than others, I still freeze if anyone raises their voice in anger. But I’m not quitting. The classes are still there when I feel better, there is no pressure to get a belt within a certain time limit.

I’m also learning that there is no shame in feeling fear, and no need to pretend that everything is ok. Acknowledging that there’s a problem is the first step to finding a solution after all. I’m starting to learn about pushing myself, face the fear of the Chaos drill in our classes where you have to deal with multiple attackers at once and eventually the chaos gives way to logical thought, so you can plan your next step. Surprisingly this exercise is similar to everyday life, hence the analogy.

So in the end, as contradictory as it may sound, learning to fight is very relaxing for someone with anxiety. “What if?” is a horrible question to ask oneself all the time. “What if someone tries to rob me?”. “What if I get trapped in a fight?”. “What if someone tries to assault me?” (Something most women have to worry about, believe it or not). Well, no worries! As far as physical harm goes, I’ve got myself pretty covered! And it’ll only get better! Everything else… Well, still working on that… But it’s a start =)