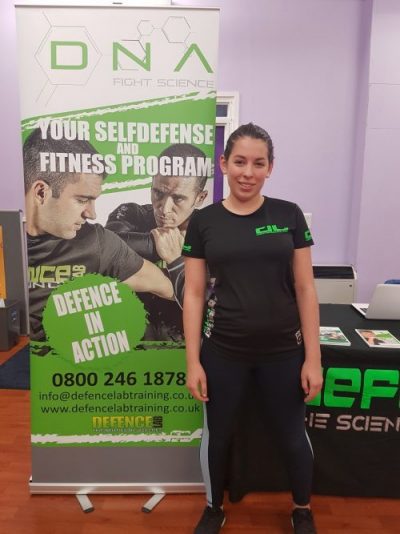 Since I was 15 (I am 17 now) I’ve been getting sexually harassed in the street by men of all ages, on their own or in groups, and it is really intimidating. I was followed home by a man after he harassed me and that’s when I spoke to my Dad about doing self-defence and he looked around and found Defence Lab.

In my first lesson I found that everyone was really friendly and Tahir made it very easy to talk to people by introducing me directly to them.  I really enjoy the actual self-defence as it was always put into context, showing us that these things will be useful if we are ever involved in a conflict.

Another aspect I really liked was that it’s a fun way to stay fit. I don’t enjoy gyms or running, but Defence Lab has made it something I look forward to; and I can actually do a press up now! My favourite thing, is that the moves we are shown can be used on anyone, by anyone. I’m 5ft 3in girl, so being able to fight a grown man is important as pretty much everyone is bigger than me…

Everyone involved with Defence Lab, instructors or other students, are all really friendly and supportive of one another. You don’t need any previous experiences with self-defence or martial arts to do Defence Lab, as if you need help, they will give it to you. I’ve been going to Defence Lab since October, and since then I’ve noticed improvements in my fitness and confidence. Now, I don’t get intimidated by harassers, and I feel safer when I’m out.